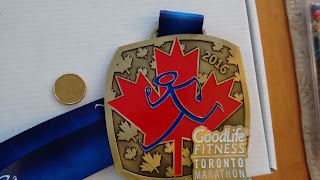 Hard to know where to start, but let me first talk about the race organization...

Abysmal.  I've always loved this race, but when you run out of water/Gatorade in the last 10km of a marathon and it's not even hot out?  That's beyond pathetic.  Some aid stations at the end had one or two people manning them - it was a gong show.  You had to stop and maybe get water/Gatorade (or maybe not?)... amateur hour stuff from a race organizer who has been doing this entirely too long to make those mistakes, repeatedly, and not get called out for it.

The race ends at Ontario Place, which is near... nothing.  We managed to find where the buses were after a fair hike (exactly what you want to be doing after a marathon).  Oh and bag check was a treat - they laid the bags out in the rain to get soaked.  Hey you know those dry clothes you packed?  We didn't want to pay for an extra tent, so....

Race markers were wrong.  I know, you'll try write it off as me putting too much trust in GPS, but they weren't even close.  I'd be right on pace and next marker 40 seconds off, then the one after it back on pace?  C'mon.  Amateur hour.

I can't see myself doing this race again, too many other options to put up with that kind of nonsense.  Even the course isn't as appealing as it once was, that out and back along the lakefront goes on forever.

At least their medals are big.

It started out really well, held my target pace (as best as I could tell with the randomly spaced kilometer markers anyway).  Took it really easy up Hoggs Hollow, the big hill near the start, kept it out of the red.

As you can see from my pace band (if you really want to click on that monstrosity) I had factored in everything... the speed on the downhill, the tailwind, and then the fade into the headwind.  It was a brilliant plan, really.

But you know what they say about plans.

Everything felt wonderful through to about kilometer 26 or 27... that's when it started to feel like work.  I backed off a little and had a heart-to heart with myself, eventually deciding that pushing to keep to my plan would just blow me right up.  So I tried from then on to just stay within myself and find whatever pace I could that wouldn't put me too far in the red.

I did all the long runs, did some speed stuff, but really just didn't run enough to improve the marathon result.  My weight was bad, too, nearly 190lbs this morning when I should be under 180lbs to even think of PB'ing a marathon... so as usual I will hereby vow to lose weight (and then will order pizza instead).

Posted by jonovision_man at 4:55 PM