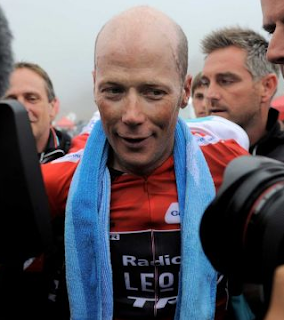 Having never done anything of much significance in a previous Grand Tour, suddenly he's a beast, capable of handing 28-year-old Niabli his butt.

The evidence against the guy is admittedly far more circumstantial than against his ex-teammate and friend Lance (who had actually tested positive and such).  So it's possible a 41-year-old who never accomplished much at the pointy end of cycling suddenly peaked and could burn away from everyone like he never could throughout his career.

For me, between Wiggins, Froome, and now Horner, it's painfully obvious cycling is still in the doping toilet.  The UCI is more interested in appearing clean for those not paying close attention than to actually being clean.

Maybe that's why, at the age of 25, having completed his first Tour de France, David Veilleux is retiring.  Who retires at 25 from a sport they're just getting the hang of?  Maybe a guy who sees what it takes to go further and didn't want to do it.

Posted by jonovision_man at 7:49 PM