Cycling: Are Cars Your Biggest Worry?

I was just browsing this article from the Toronto Star that contains some statistics on cycling injuries.

This part stood out:


“For three out of four, something else is going on. It could be just a crash on a trail or a collision with another cyclist or a pedestrian,” Webster said.

Personally, I've only been in the hospital once for a cycling-related incident, and it was when I was hit by a truck... but some of my other crashes:
Incidents with cars are probably more likely to cause death, but it's worth thinking of other ways to make your ride safer.

Speaking of which - to nobody's surprise, helmets work!


While the numbers point to a positive trend, they also show the message about helmets hasn’t reached some. Of those who still ended up in hospital trauma units because of head injuries, 78 per cent were not wearing helmets.

When I was hit by a truck, it cracked my helmet.  I did not sustain a head injury. 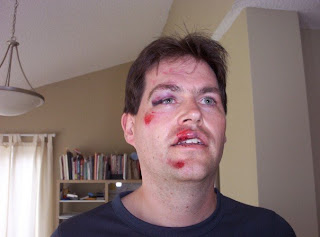 Shouldn't that be enough?  Wear a lid!
Posted by jonovision_man at 9:02 AM