It's set in the Belwood Lake Conservation area. I didn't walk around too far away from the race site, but what I saw wasn't terribly inspiring... the only really neat feature was the giant dam that created the lake for the swim.

This was a "C" race for me - I signed up this week, didn't taper or really prepare much for it.

1000m single loop, along side the dam. The beach wasn't the kind of place anyone who wasn't doing a triathlon would hang out very long, but the water was clear enough. I couldn't see the bottom, but I think it's very deep there.

I got in 10 minutes before the race for a quick warm-up and to get acclimatized. The water felt warm, and I was pumped and ready to go! I was in the second wave, and they were leaving a lot of space between waves, so I knew traffic wasn't going to be a big concern. I lined myself up near the back, 3, 2, 1, we were off.

All in all it was a very uneventful swim. I felt comfortable and good, and thought I'd done fairly OK. It's my weakest sport, so I'm usually near the back of my age group (and the fact the wave behind us caught up confirmed this!).

After a loooong run up to transition (this seems too common!) I went over to the bike rack.

Hey, who took all the bikes? Oh right, everyone else in my wave is already gone! Well not everyone, there were a few people left, but by the time I muddled through transition it was just me. Disheartening, but I knew my best was still to come.

As I struggled to get into my socks, I had a big hamstring lock-up. It's happened more than once after the swim, I don't know what's causing it, I'm hardly kicking at all during the swim. Maybe I'm tensing up or something? I would like to figure that out - it cost me about a minute of stretching in an already painfully slow transition.

Finally, something I'm good at!

The course was pretty flat, only a couple hills to speak of and they weren't steep at all. Roads were smooth, it was a good fast course.

I started hammering it from the moment we hit the road, and immediately found myself passing people. The occasional super-star from later waves blew by me as well, but for the most part I was the one dishing it out! It was fun.

By the halfway point, my average speed was 36 km/h... this was just ridiculously good, so I knew the tailwind and slight downhill had helped. Sure enough, when I turned around at the turn-around point, the head wind just about stopped me dead. Very windy, I tried to make myself as small as I could on my aero bars and just keep pushing. By the time I finished up, my speed had slipped to just shy of 33km/h - not bad at all, I'm happy with it. I'd like to try that course again when the wind isn't so harsh, though, I think I could really rock it.

This went better, racked my bike and put my shoes on. I have orthotics I need to swap between shoes, it takes a bit of time, but I felt fast and didn't dawdle.

The Run
The run is on gravel trails. It starts by crossing the dam, then heads out on some double-track rail trail. A bit rough, but I didn't mind it at all. The route plays with your mind a little - on the way back, you can see the dam and the finish, but you have to double back and do a second out and back on a different trail first. If you're not expecting it, it can be a nasty surprise!

I was dreading the run. My training has been geared toward Ironman, so it's heavy on the long slow stuff and short on any speed work. And worse, I haven't done any brick workouts in months - they're not important for Ironman, as the penalty of a slow run start is so small compared to the overal run time.

So I plodded out of transition just looking for a comfortable pace. To my surprise, I didn't feel bad at all, my legs were working well and I had energy. I crossed 1k at 5:12, which made me very happy - I was expecting to be north of 5:30! I figured I'd try keep this pace, and maybe back off to 5:20/km or so if my energy wasn't there.

My run splits:
I don't know why I felt so good. I did the carbo-loading thing, ate a decent about before the race, and managed to get in some Gatorade during the bike. But I was shocked at just how well it went (and WOW what a finishing kick!)

The most fun was the last two kilometers. I was starting to hurt, when I found myself behind someone from my wave (M30-39). We had all started together so passing him meant beating him.

I stuck with him during the 6th kilometer - his pace was about right for how I was feeling. But I knew I wanted to cross the line first. This became my mission.

After we passed the 6k marker, I started to pick it up, and his pace just wasn't as fast as I wanted to be. I passed him, a tactical mistake... I'm sure he saw my leg and realized we were racing, because he picked it up behind me. I could hear him, plod, plod, plod. I started to feel pressure to go faster, but it wasn't there, and I backed off, letting him by in the process.

But I didn't let him get away, I stuck behind him and reeled him back in. I could see the finish now, off in the distance.

I asked myself - what would Simon Whitfield do? Well he would throw down his hat and give 'er to the finish. Sadly, I didn't have a hat. But I did have legs with a little something left and a tremendous desire to beat these guys.

So I turned it on, big-time. I bolted around the guy I'd been focused on, and passed all three of them in a blur. All I could see was the finishing chute, and the fans lined along side cheering. At that moment, I was Simon Whitfield (except a wee bit slower)! I took a quick glance back, nobody had managed to respond, and I fired across the finish.

I stood there, gasping for air, grinning ear to ear. It was a special moment... for a few seconds there I felt like I was competing for the win instead of a middle-of-pack age grouper finish!

I couldn't be more addicted to this sport.

I don't usually care much for famous people, but Simon Whitfield is a pretty amazing guy. He has the heart of a champion, he is always able to dig deep and find that extra something when it matters the most. I respect the hell out of him and he's one of the few people who really inspires me. 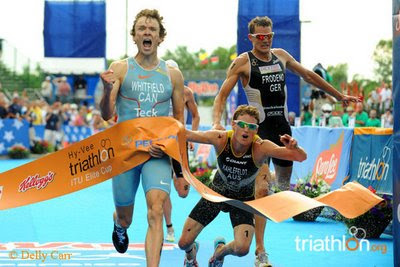 (Nobody wiped out behind me, and I didn't win, but in my head this is exactly how it looked! LOL)

I'm delighted with my result.

The swimming is what it is - I work at it, it gets better, but I'm still not that good. I feel like my form isn't horrible, but I'm losing time now with my upper body strength. I'm going to work more on developing a stronger pull and maintaining it, although my pace is fine for getting through the Ironman swim so I'm not that hugely concerned.

On the bike and run I feel so strong now, it's just all coming together. I surprised the hell out of myself with my run, it's my best triathlon run result by a lot.

Oh, and I hate my age group, they're too fit and awesome.

Next up: Ironman Canada! There will not be a sprint to the finish for me there, that I can guarantee.
Posted by jonovision_man at 1:36 PM

I also used to suffer from leg cramps in T1. For me, I found drinking more electrolyte solution before the swim (not just water) did the trick. Sounds like you're just rounding into it in time for IMC.

congrats on finishing with a good run, 4:03min on the last K sounds good to me. Good luck in the rest of your prep for IMC

Amazing performance! I should have been there to record your last mad kick to the finish!

Nicely done! I'd kill for run splits like that!

That finishing photo is indeed a very inspiring one. Way to go at Belwood - giving your all like that ROCKS!

All the best in your quest for Ironman Canada.