There are two options for this one - try find an organized ride or free ride it on a London day.  I had previously done the Half PRL in an organized ride, got dropped a couple loops in and had a rough day - so figured I would have better luck free riding it.

So when I saw London on the schedule for a Saturday?  I circled it.

One hot tip - if you set your last name in Zwift to include (PRL Full) - people cheer you on, give you Ride Ons, etc. Also saw a few others doing the same ride which was neat!

At one point there were over 7,000 riders in London!!!  Lots of folks to interact with, draft off (especially on the flat parts!), be inspired by.

First Few Laps
It hard to not get excited starting out something like this... so I probably went out a little hot.  Fastest climb up Box Hill was Lap 1! 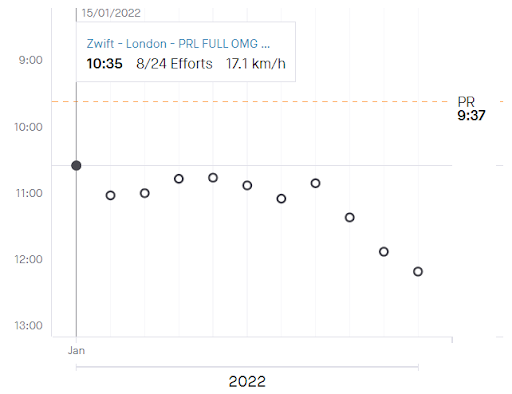 A little over an hour in - disaster! Complete power drop-out. What a time for a battery to die!
I stopped, messed with it for a bunch, found a spare battery... about 5 minutes to get going again, and another 15 or 20 to get back into a groove.
After that every lap was kind of the same
Laps 9, 10 and 11
... were pretty death-marchy, as you can see from my Box Hill lap times. I'm not in summer shape here so almost 6 hours on the bike was hard.  Had a tough time holding 2.5w/kg even on Box Hill climb, just kept giving what I could. Stuffed myself as full as my stomach would allow for!
The Last 8km
One of the goofy things about this ride is that after you've done 11 London Loop laps, there's still 8km to go... for some reason you cross over the Thames again to do a loop near the Box Hill start then return to London and finish at The Mall.  I'm assuming this is to match the distance of the "IRL" PRL ride??
It's a bit diabolical, but I mostly used it as a cool down.  Spin spin spin, survive, finish.
Never again.
Final Thoughts
Honestly, doing laps wasn't that bad - it was nice to know the course and use some of that knowledge to have a strategy the next lap. Knowing where the Power Ups were and when to use them (save the feather for the escalator!!!) was nice.
First couple laps I tried to get into a pack on the way down Fox Hill, but realized there were always other riders joining in at the bottom from other routes - so didn't need to worry to set up a draft up to the escalator.
People said this was easier than the Uber Pretzel - I'm not sure. Maybe!?  For me that extra hour really hurt, even though the Uber Pretzel ends up the Alpe... Uber also has the long Fuego Flats sections in the middle, so lots of easy recovery riding. YMMV!
I'm pretty sure I'll never do this again, though... I might Uber it up someday though.
Posted by jonovision_man at 11:56 AM