Raid The Hammer, by Don't Get Lost Adventure Racing.  Linky.

This is an Orienteering / Adventure Race on foot in Dundas, Ontario!

It's a blast - you get to run around trails and neighbourhoods and bushwack and read maps and such.  We had never done a run-only Adventure Race so this was new to us!

Quite a mix of people at the start - the running jackrabbits and the hiking orienteer types!  As usual the start is crazy, and our goal was just to stay within ourselves and not get carried away trying to beat everyone up the first hill.

We didn't beat everyone up the first hill.  Success! 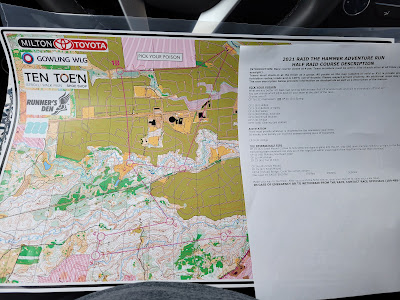 We had a pretty good plan laid out and I had pretty much memorized the first few turns, being city streets and simple paths.  As usual we passed people stopped looking at their maps early on... on city streets... so yeah, if you're lost there?  It might be a long day for you!

The key to the orienteering part of it is always knowing where you are on the map and what direction you're meant to be going. 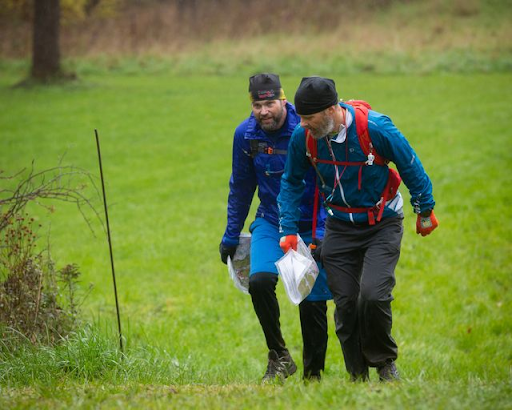 This is hard.  Knowing the distance between points is one thing, but everything is approximate.  Knowing how far you've gone?  Really tricky.  Some folks count steps, but when you're alternating running and hiking (up hills) or slipping on mud or whatever, it's always going to be a bit of a wild ass guess.

We mostly did great, though.  Grabbed bearings on the fly using my buddy's new thumb compass (amazing!) and just generally knew where we were based on trail intersections, where the water was, elevation markings... we've done this kind of thing before but this was next level.

We did mess one up - followed a trail not on the map thinking it was the trail that was on the map and got thoroughly lost.  Cost us about 5 minutes, which overall isn't the end of the world.

Our results are messed up right now but we think we finished 6th in Masters (of 18).  Not bad for a first go at it, with minimal run training!