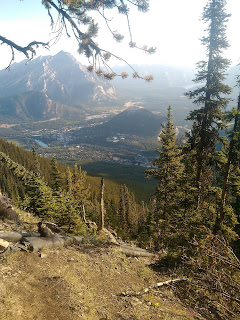 I parked at the Spray River Trailhead - basically you drive to Banff Springs Hotel, then keep going past the parkade.  There's a small parking lot for trail users there.

From there I took the trail up the mountain (not the Spray River Trail - this one goes UP from the other side of the parking lot).  I kind of meandered up, there were a few options, I took the ones that went up and eventually came out at Mountain Ave.

At the end of Mountain Ave is another parking lot - this is where folks park to take the gondola up. 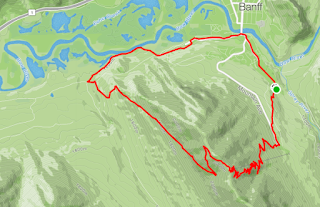 We call those folks "wusses".

This is where the REAL work began... up to this point the trail was reasonably runnable and not crazy steep (although it was steep...).

But from the Sulphur Mountain parking lot up, that changed... at first it was reasonably OK, but the further up I went the less running I could do.  I don't think I ran at all for the top 50% of the trail.

The Top
Going DOWN!

There are two options - go back from whence you came, or go down the backside of the mountain.  I hate out-and-backs, so of course I went down the other side.

I was shocked at just how much this hurt.  My quads were absolutely exploding by the end - the grade is just so much.  I usually pride myself in my descending, I can up the cadence and fly down.  But that didn't work at all, it was just too long and steep...

Back to the Start

I followed the trail over to the Cave and Basin area - follows a little road.

From there there were a bunch of trail and road options to get back to the start.  The initial plan had been to follow the river then to come back up from Bow Falls to the parking lot - but I was so cooked I just followed the road back to Banff Springs.

Total run length was 18km - but it was so much harder than a normal 18km run.  The air was thin, the climbs were tough, it really killed me!  But I'm so glad I did it... such is the odd nature of running and stuff.  What doesn't kill you makes you stronger!

It was also my first crack at a "real" mountain run.  Respect to those who do this stuff often, it's really tough stuff.

Posted by jonovision_man at 2:44 PM