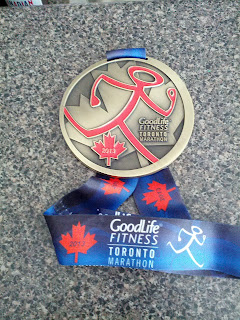 I took a hiatus from marathons because they are stupid.  They are long and they hurt, and I have never been able to get those last 10km right.  I really just needed a break from it to focus on other things.

I don't know exactly what to expect - I haven't had huge running volumes, but I got in my long runs and some fast shorter runs and lots of biking... so what the hell, here goes nothing.  Loosely based on the FIRST training program, minus the track work.

The race is net downhill, but it's all in the first 20km.  After that it's mostly flat, a little up and down, and exposed to whatever wind decides to blow.  So while the conventional wisdom says to negative split, at this race an even effort throughout will mean a faster first half than second half.

Could end up as a death march, could be glorious, we'll see!