These guys went mountain biking in the forest, in the late evening.  They were separated, one guy made it back to his car, the other was lost in the woods... for 5 hours!  The police helicopter was called and he was finally located after 1am.

Yikes!  Now let's replay this event assuming they had with them a Garmin Forerunner 305.

You're lost in the forest.  You want to get back to your car.  Press Mode.  Navigation.  "Back to Start".  Something like this will pop up: 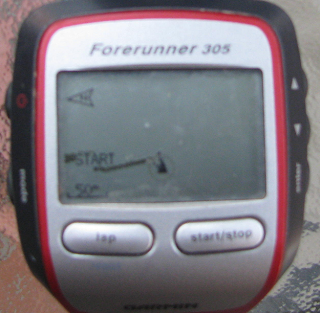 You are the black arrow.

The flag labelled START is where you started.  This means where you first hit the "start" button, so if you did that late, well, you might be in the forest awhile.  Pack a lunch.


The scale is shown in the bottom left corner.  If you don't see where you started, you can zoom out by pressing the "up" arrow (top right button).

Now this isn't Google Maps, or a fancy Garmin navigational system that will tell you in a sexy voice to "turn left in 100 meters"...  the Garmin Forerunner 305 has no concept of roads, trails, or any other landmarks.  All it knows is that there's an earth and you took a certain path on it (the black line).

The best strategy might be to simply try follow the black line back to the START.  Or you can try take other trails that seem to generally head in the direction of START - this may be pretty good, or may get you on the wrong side of a lake or something impassable.

But at least you now have a sense of where you are relative to where you started, and what direction you've travelled in... for most people who are reasonably bright, that should help a lot to find your precious vehicle and get out of the forest!