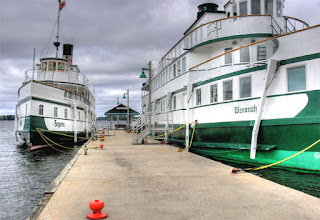 Gravenhurst Triathlon, up in the Muskokas. This is an Olympic distance triathlon.

I wanted something between a 1/2 Iron but more than a Sprint, so this was the one. It will be my first Oly.

Cool feature of this race: it starts on a steamship! How cool is that? You get on the boat, they steamship you out onto the lake to the start.

The Olympic distance is a bit more swim-heavy than I would normally prefer, being a weak swimmer.

And to make matters worse, I tweaked my shoulder/back two weeks back with a fall during a mountain bike stage at the Moraine Adventure Race... and haven't been in the pool since! Two weeks with no swimming and a swim-heavy race in two weeks.

On the bright side, it's feeling much better today, so I think I will get back in the pool in the next few days.

Get through the swim, hammer out a nice bike, and run as strong of a 10k as I have in me to the finish!

Posted by jonovision_man at 7:05 PM

definitely want to do this race sometime Jonny. Best of luck to you!

Just stumbled across your blog, Gravenhurst is on my to-do list too! Have a great race! :)

Gravenhurst is fun - the jump out of the steamship really helps take some of the jitters away. Good luck.