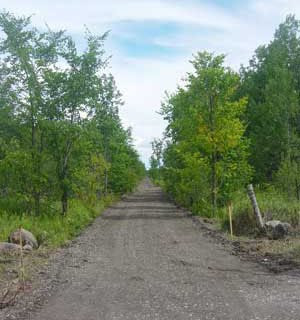 In preparation for my likely participation in the Tour of Bronte, I decided to take the road bike out for a spin on some gravel roads.
I'm no stranger to gravel - I ride on gravel roads a lot. But always on my hybrid, with wider cross tires (700x35c) with grippy tread and nice wide handlebars.
The Set-up

The only change from my normal road set-up was to swap out my 700x23's for some meatier 700x25's (a Gatorskin and another similar tire).

The neat thing was the different types of gravel roads, and how the bike reacted to them.

The lack of grip was immediately apparent, although honestly it wasn't as bad as I had expected.

Far trickier was the narrow handlebars - I'm used to correcting a lot with the wide hybrid handlebars, which are more like a mountain bike. With the narrow road handlebars, you have to do more work and have better balance from your core.

Getting down into the drops helped a lot with this, the lower center of gravity seemed to settle things down when they were getting squirley.

The other thing that helped was smoothing out my pedaling, especially on the sandier gravel where the back wheel wanted to step out. A nice smooth spin helped keep this in control, while sudden jerks tended to get the rear wheel loose.

All in all, it was a blast! The speed combined with being just barely in control was a rush and a half... can't wait to try it again.

Posted by jonovision_man at 4:28 PM

Sounds good. Say did you need different rims for the change or could you just swap 23 to 25 on the same rim?

Same rim, I think all road bike rims can handle a 25 without any trouble. I can't go any bigger, though, or the tire wouldn't clear the brake calipers!

Sweet thanks for the info. Did you go with a gripper cyclecross style 25?