I just spent almost 4 hours on my indoor trainer...

Such is life with Zwift - the gamification of indoor workouts is the most exciting thing I've discovered in years!

Today was the Mega Pretzel!

I found a few guides about it, but I found them all a bit lacking especially on strategy... so here goes.

I did this as part of the Zwift Fondo Series - having people around to draft helped a lot, not sure I'd want to do this solo.  People do it, but isn't 4 hours on the indoor trainer torture enough?

zwiftpower.com has the best search, you can filter by route, start there.

The course is mostly paved (or the little gravel sections are short) so get a nice light road bike to start...

You hit it twice - at about 11km for a single reverse loop, and again at around 85km going the normal direction.  It is almost entirely gravel, and road bikes have a massive disadvantage.

Very few people switched bikes (except for the 2 in this picture!) but they were absolutely fodder for those who did.  I picked up 50 placings the first trip through the Jungle, and retook ~5 positions from people who were stronger than me the second loop.

Don't wait for the gravel - it's at the bottom of a hill, and to switch bikes you need to be stopped... takes forever and you lose precious time. 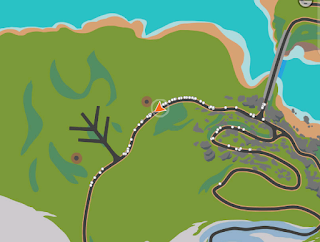 On your way up to the jungle, you pass a windmill... right around there are the start pens (the weird angled roads you see here).

You can either do it right there, or at the top of the next rise (but don't get onto the descent or stopping takes forever!).

You exit The Jungle the same way you entered - as soon as the gravel ends, swap back to your roadie, and pat yourself on the back at how many places you made up!

I'd suggest practising going into the Garage mid-ride when you're moving on a less important ride.  Careful not to hit "End Ride" by mistake!  You can be in the Garage before you're stopped, but the icon to switch bikes will be disabled until you are.

I really enjoyed it, but there are definitely easier ways to pile up 100km+ on Zwift!  Hit the desert and draft at 50km/h in circles for a couple hours, for example!

Posted by jonovision_man at 4:35 PM