I'm back for a Ride Report!

The Simcoe County Loop Trail is a 160km loop, mostly on rail trail, and mostly gravel.

Most people seem to start/finish in Barrie and travel clockwise, but we chose Orillia instead as it was closer to home.

We did it in one day, although lots of people split it up to enjoy what's along the trail.

OK so before I dig into the segment by segment report... here's my advice.  Take it or leave it!

We started at the Orillia waterfront, and made our way through town to the start of the rail trail.

This was probably the best rail trail surface, packed and consistely good gravel all the way to Barrie.  Not a lot to see - despite the map looking like it's along the water, it's really not, until you arrive in town. 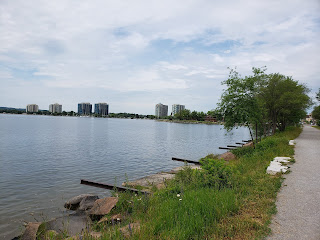 Waterfront was fairly busy, but we made our way through easily enough.

Then ... the trail ends, and it's through town.  Busy town, no real bike infrastructure, not all that pleasant.  Would be great if the town realized what an asset they have in these trails and this loop and fixed this!

Finally leaving town - you exit on a paved country road, which seems like it's going nowhere... until boom, you continue past a T intersection into a charming bit of woods!  Really nice little trail.

Then.. more pavement. I was getting pretty sick of the Barrie area by this point (and certainly wouldn't want this to be my closing kilometers of the ride, so don't go counter-clockwise from Barrie!!!)

There is one section along a road called Snow Valley Road where there is a trail, but it's not clear whether you are "supposed" to take it.  We took it, it's slower but pleasant.  It ends and you're back on road.

Finally back onto rail trail!  Yay.

The surface of this one alternates, sometimes it was great, other times not so much.  There are some pretty loose and sandy sections here, and it's a sloggy grind at times.  Still fun and rideable, but sloggy.

We stopped at the spring water in Elmvale - cold, refreshing, allegedly the cleanest water in the world!  It's just south of the trail on 27 at the top of the town, don't miss it, little red barn thing.

The trail continues to alternate between good and bad to Wyevale, after which it's good!

My favourite trails of the loop were the forest blast into Penetanguishene and out of it.

The way in - the trail seems to still follow some kind of rail trail, but the bridges have been replaced and it dips and turns and dives through the forest.  So much fun!  Be careful when wet, those bridges can be sketchy...

The waterfront section was short, and then there are some killer in-town climbs to remind your legs what climbing is all about...

Finally there's a blast out of town on some awesome paved trails, winds down a hill through forest, so much fun.  Seems to be some side trails worth exploring on a mountain bike too??

Eventually you emerge from forest and into...

Pavement continues along the shore.

The shore is lined with homes and apartments, with the beach on the other side of the trail from the properties... this could be pretty sketchy if it's busy, be cautious! 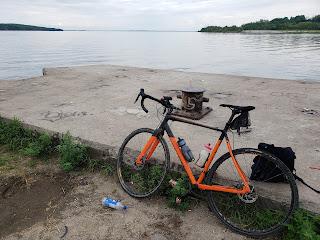 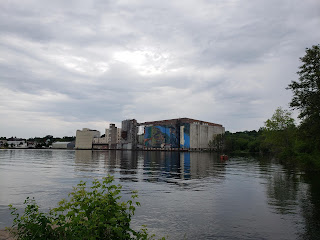 There is industry and lake and stuff.  It's nice.

From here you're on pavement for a good long stretch.  It's nice, but there are a lot of road crossings to slow down for.

Waubaushene to Orillia via Coldwater

Finally the pavement comes to an end, and it's back to the gravel we know you all love!

Eventually you're on the Uhthoff Trail, which takes you into Orillia.  This section was a bit boring to be honest, long stretches of straight former railway with fields or kind of repetitive trees.  They did a great job replacing some old bridges though, mostly well maintianed (a couple sections weren't but they were still fast and good).

Finally back at the finish, 160km later.

It's an interesting enough loop.  The best parts are at the top along the Georgia Bay communities.  The rest is pretty typical Ontario Rail Trail - gravel, fields, trees, flat.

Not sure I'd be in a rush to do it again but worth doing once.