That's about it... last year we put up a tent as well, but we didn't even really use it.

Big addition this year was electricity - we noticed a team last year running a a cable out to some service by the road.  This would be useful for re-charging light batteries and such, although not critical.

Ride until the end and do more laps than last year (6 for me last year, 11 for our team).

Last year I messed up my food - didn't have enough solid food, sugar put my stomach in twists, heartburn - it sucked.

Note to everyone: when you go through McDonald's drive-thru and ask for 4 Sausage & Egg McMuffins and that's everything, they ask you "that's everything?" at least 2 times.

The nutritional breakdown is probably not something most people would think of, but I was already hitting carbs hard on the bike - sports drinks and stuff.  The muffin is full of carbs, the egg is packed with nutrients, there's protein, fat, and most importantly...

And I didn't cramp at all this year, whereas last year I did.

So there you go.  Science.

I also had the never-popular V8.  Slammed back a can after every lap - potassium and shit-ton of salt.

24 cups of lukewarm coffee in a jug (2 batches in the coffee maker, brought to room temperature, and consumed a bit at a time all night).

The more "typical" sports food - bananas, Gatorade on the bike.

Yes, it's all weird, but damn it was good.  And my stomach put up with it, and I had energy on my last lap, so I figure it worked?

(When I did Ironman that was the wisdom I received too - treat it like an eating contest as much as an athletic one.  When you are burning 8000-10000 calories you need to get as much in as your stomach will take, and variety helps that!)

My teammate did Lap 1 again.  He commented on how awesome the start is, with the cheering crowd roaring as you charge up the first hill.  I should do it one year, if we ever do this again, which we won't.

Lap 2 was my turn.  My buddy said "you're going to hate this course!" - but I didn't.  It was technical but not a single part was un-ride-able.  The hills were sometimes gruelling but again, always ride-able (except when others around me fell or whatever, which happened a few times, but that's OK).  I really enjoyed that first lap, came to the finish smiling after about 1h 7 minutes.

Lap 4 (my 2nd) was my turn again - and again we forgot the stupid timing chip!!!  So again, my teammate had to wait at the end.  I saw a large deer right next to the course on the singletrack, so that was cool.

All was good so far.  Ate and ate and ate. 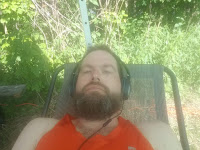 My thumbs started to get blisters from holding the handlebar grips - so from this point on I duct taped them.  First try the duct tape actually came loose and slid off, even from under my glove - second try I secured it to my palm and it held and did the trick.

Lap 6 was still in light, still felt great.  No cramping!  No fatigue in the legs.  Just felt solid.

Lap 8 started mostly in the light, but the sun set during the lap and in the woods it got very dark.  Lighting helped but every so often the sun would shine at the wrong angle and my pupils would respond, leaving me blind to the course.  It was harder to ride then than in the pitch dark, even with the lighting.

Lap 10 (my 5th), things came apart.  I can't pinpoint exactly why, but the fatigue accumulated and showed up all at once.  It was really hard to get going, it was now after 11pm.

I screwed up my clothing - standing around it felt cold, but once I got going I was drenched in sweat.  I stopped and took off my jacket, that helped a lot.

But later in the lap I found myself pushing the bike up some of the hills I had no trouble with earlier (the sharp singletrack rooted climbs mostly).  Just kind of lost my mental focus, not so much the dark but rather the fatigue.

That lap was about 12 minutes off my earlier pace.  Partly the dark but more the rest of it.

It was cold and I was ill prepared.  Had a really hard time getting any sleep at all, when 4:30am came around I missed my time to get on my bike.  My brain just didn't have any interest.

Finally both me and my teammate got up at around 6am.  I was ready to go but it was his turn, so out he went and we were back in business.

Looking back I'm not sure if I could have done a 4:30am lap or not, and if I had I'm not sure I'd have done 2 more after it.  So I don't know if it cost us anything, I was pretty bagged.

I felt good again, the sun was shining, it was a gorgeous morning when I set out on Lap 12 (my 6th)!

I had a lot of energy, almost no fatigue in the legs - sure I wasn't 100% but this is after like 20 hours of this nonsense and very little sleep!  I felt like a million bucks.  My lap time for my last 2 laps were 1h13 and 1h14, only 6 minutes off my best laps at the start, so that's a pretty good deal.

Lap 15 (my 7th) was about the same - a lot of fun, took it easy(ish) and just enjoyed it.  Finished just before noon and put a bow on it.

Technically we could have squeezed in one more lap (you have until 1pm to finish) but we were at 7 each at that point and out of gas.

I felt a lot better about this race - last year we left early due to pending storms in the morning and the race was actually called off before 24h, so this year we made it to that final hour.

I think there are a few things I could have done better, but not much!  It was horrible at times, fun at times, and all in all a pretty great and epic thing to be a part of.

Team of 2 is tough.  1-1.5h isn't a very long break and you end up doing so many laps.  Larger teams end up being as much about partying as riding, not sure if that's my cup of tea though.  Solo is ridiculous.