The plan was really just to try Intermittent Fasting, but to be more aggressive with the fasting.

I based my strategy on "The Obesity Code" by Jason Fung.

He theorizes that we are fat because of insulin resistance, and that the best way to fight it is to spend more time in a low insulin state.  He recommends intermittent fasting as the primary tool.

Everything in his book spoke to me - the way I was hungry all the time (ALL the time), the way that I would do 10h/week of exercise and still gain weight, the way that calorie counting worked for short term but my weight would always, always come back...

Without further ado - here are my results so far. 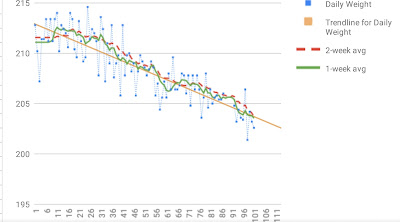 The blue dots are the daily measurements - they fluctuate a lot, based on when I was fasting/exercising/etc.

For people who have followed my blog and life, you'll know I've tried to lose weight over and over.

I had success with counting calories, for years.
I added in exercise - copious amounts.  Ironman!
When my weight would go up - I'd count calories again.

But it became harder and harder.

If you believe Fung, it could be that my insulin resistance simply got worse and worse.  I believe this, partially because I had a blood test where my doctor told me so!  I was on a bad road, and I feel like carbs played the lead role.

Some of the fasting time isn't actually on that chart - the weight just didn't come off immediately.  It took about 6 weeks for anything to happen, which felt like an eternity.

Then one day... the weight started coming off.

Actually before that... I remember one day saying to my wife "I don't feel hungry!".

It was a revelation.  I was sitting on the couch, watching TV, and I wasn't hungry for food.

I was always hungry before that.

It's a weird thing with fasting - you think you'll be hungrier, but the opposite happens.  I'm never hungry in the morning.  I'm rarely hungry throughout the day.  I get a little peckish in the evening, but much less than the ferocious hunger I used to feel.

When am I most hungry?  After I eat carbs, especially sugar.  It's like crack cocaine, I become obsessed with getting more.  (I assume that's what crack is like, right?)

I started checking my ketones early on, and they kept coming back negative.  Then I took the "low carb" diet more seriously... eventually I figured it out.  I can get into ketosis at will now.

The easiest way is to run or bike while fasted, or having eaten very few carbs.  In the immediate aftermath there won't be ketones (your body sucks them up as fuel!) - but a few hours later?  Dark purple on the strip.

Even days when I feel like I really pigged out, if it was on high fat / low carb food?  The scale gives me a good number the next day.  It's pretty amazing.

Jason Fung's magic to me is that he doesn't prescribe some exact regiment.

You can't sustain that.  He says as much - Atkins fails because most people will eventually cheat, and it snowballs.

Build the approach around your lifestyle.  Your daughter has a birthday party?  Go!  Eat cake.  Pizza.  Have fun.  Don't give it a second thought.  Fast the rest of the day, before you go to the party.  Or fast after!

It's not a religion - you just always have to understand the insulin has to be low most of the time, and arrange eating/fasting windows around that.

I'm excited.  This has been a great little run, and I'm looking really forward to keeping it going into 2019!  I feel like I finally found something that really really works, and addresses the root issue.

Posted by jonovision_man at 9:49 AM