This was the first ever Whitby Marathon.

You'd expect some glitches in a large undertaking such as this, and there was a big one: the course was completely overhauled just weeks before the event. That was unnerving, but in the end it was the only negative thing I have to say - race weekend was a blast.

Kit pickup was fast, T-shirt nice, and the facilities at Iroquois Park ideally suited for something like this. And the extra finisher's shirt was a nice touch!

I did the half marathon, which spared me some of the worst of the course changes.

It was fairly flat, mostly the hills were gradual inclines. The only exception was one short trail section connecting two roads on the far east end - it had a couple of decent climbs that could throw off the unprepared. I'd run them in training to check them out, so no surprises for me!

Mostly there were nice things to look at and in the later half of the 1/2, good crowd support - including my biggest fans! 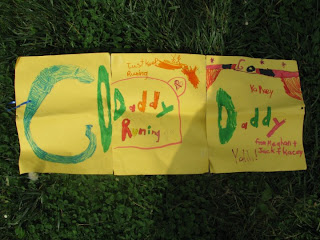 My goal was sub-1:45 - I'd just barely missed it a few months ago at a half marathon. The plan was to start around 5:00/km and bring up the pace as the race went on. 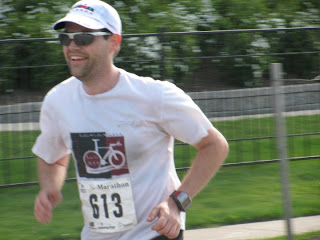 I ended up starting a bit faster than that, 4:55/km, but my heart rate looked good so I didn't back off too much. At the 2k point, a girl fired off the course to use the washroom at the conservation area... REALLY??? Talk about bad planning!

For the first 8k or so I felt great, it felt too easy! After the 8k point, I picked it up just a little, and found myself still feeling comfortable. At about 15-16k I picked it up even more, and that's when it started feeling like work... in fact shortly after that I had a brutal stitch in my side. I walked for about 10s and it almost immediately went away... not sure what that was about.

My fans were cheering for me around 18k, which got me going a bit quicker than I should - immediately paid for that little burst! From there I knew I had sub-2:45 in the bag, I just hung on to the 4:50/km pace I was running and hoped to see an even better number at the finish.

Rounded the final corner to start my finishing kick, and there was my buddy and family, all cheering! Gave her to the finish and was stunned to see 1:41:10. 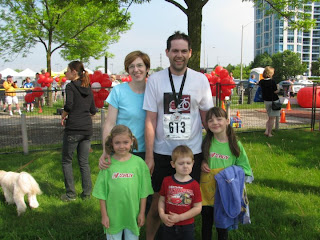 So many of my races are far away and really early, so it was great to have one in my hometown so the family out there to share the race with me! And very inspiring to have fans out there who you don't want to disappoint.

Overall, a nice event and I had a great time.
Posted by jonovision_man at 12:56 PM

Congrats on the half-marathon PB :-) Sounds like the Whitby race was a resounding success! The finisher's medal looks great. Kudos to the race organizers for spending the money for a shirt at the finish line. You got excellent fan support!

Congrats, what a great time!

a late congrats again! and thanks for coming out to the finish line to make sure the cripple monkey was able to walk back after the brutal full marathon :-)